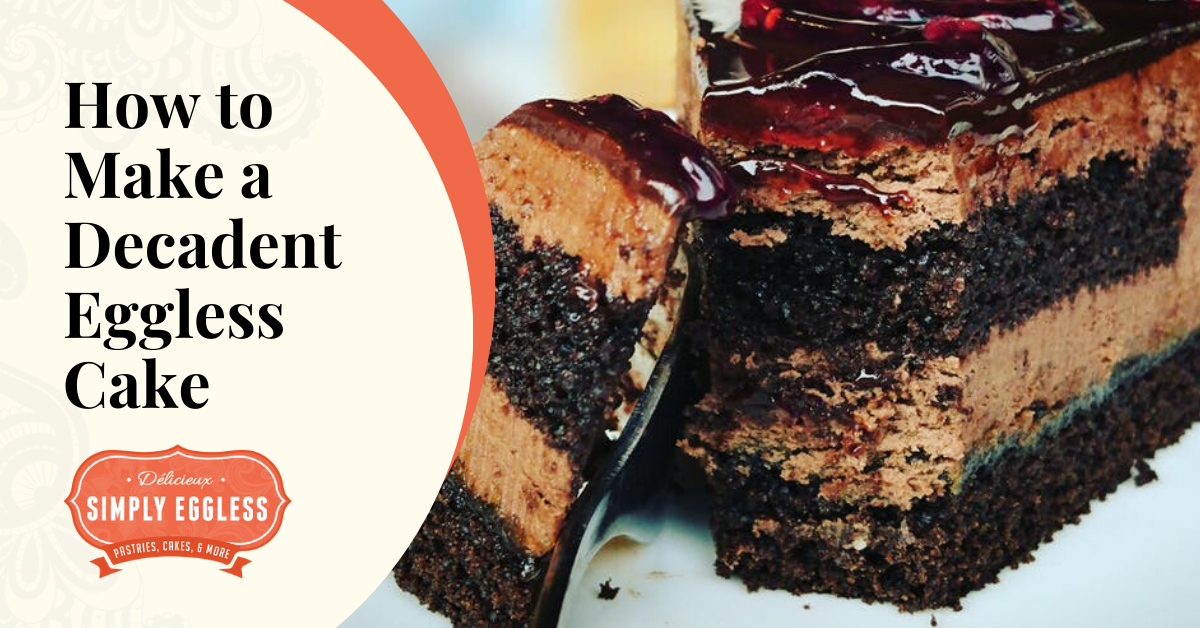 Posted at 05:15h in Baking, eggless treats by lhg-content
0 Likes

How many vegetarians and vegans do you think there are in America? Recent research suggests that over seven million of us eat a plant-based diet that includes eggs, dairy, honey, and other non-meat animal products. One in seven of those, or about one million people, claim to eat a stricter vegan diet.

One of the most difficult aspects of transitioning from an omnivore lifestyle to a vegan diet is learning how to bake without eggs. If your vegan spouse, child, or friend has a birthday coming up, you’ll need an eggless cake recipe. Read on to learn some pastry chef-approved tips for eliminating eggs from your baked goods!

What Role Do Eggs Play in Baking?

Before you can successfully substitute other ingredients for eggs in a cake or any other confection, it’s important to understand the role that eggs play in baking.

Eggs are pretty remarkable when it comes to their versatility and usefulness. Eggs can help the emulsification process, add moisture and fat, and work as stabilizers to keep your cakes light and fluffy or your cookies thick and chewy. Their fat content contributes to smooth batters and delicate, delicious final products!

In addition, eggs are a natural leavening agent. Along with baking powder and yeast, it’s the most commonly used way to get baked goods to rise and have an airy texture, rather than being flat and hard. In fact, baking powder was invented to take the place of eggs!

So Why Take Eggs Out of the Equation?

There are a number of reasons that it’s a good idea to have a few baking substitutes in your back pocket. Eating a plant-based diet, or baking a dessert for those who do, is a fairly apparent reason. Some people aren’t necessarily vegan, but do have an egg allergy and need to steer clear of eggs, even in baked products.

Of course, knowing what you can use instead of eggs is helpful for those times when you are out of eggs and can’t get to the store! If you’re a spontaneous baker who gets the sudden urge to whip up a devil’s food cake or an ooey-gooey pan of brownies, substitutes can be life-savers.

What Can You Substitute for Eggs?

Short answer? A lot of things. Which one you choose depends on the baked good in question, since eggs perform different functions in different foods. With almost all these substitutions, however, remember that the egg also adds volume. Each large egg is roughly a quarter-cup, so be sure to replace that volume when you omit the egg.

Now, let’s take a closer look at some common substitutions.

Unsweetened applesauce works best here. However, if you’re really in a pinch and only have the sweetened variety, you can use that. Just compensate for the extra sweetness by not using as much sugar or other sweetener the recipe calls for. Use 1/4 cup.

Banana’s creamy, soft texture works well in many baked goods. You’ll want a quarter-cup, which is about half a banana. Mash it well. Note that in some recipes, you might be able to detect a subtle banana flavor — which isn’t necessarily a bad thing!

Have you ever heard of a flax egg? It’s not a true egg at all, just a convenient way to refer to this substitution, which is the darling of vegan food bloggers. To use flaxseeds as an egg replacement, they must be ground finely. You can do this yourself using a high-powered blender or spice grinder, or purchase them pre-ground.

Once you have a fine flaxseed powder, add one tablespoon to three tablespoons of water in a small dish. Let it sit for a few minutes. When you return to it, you’ll see that the mixture has become thick and viscous. It’s ready to use in your cookies or cupcakes.

One-quarter cup of a mild vegetable oil will substitute nicely for one egg. However, a word to the wise. If your recipe calls for two or three eggs, use one of the other methods of substitution. A cup or cup and a half of oil is going to make your finished product very greasy and unpalatable!

Remember how we said that baking powder was invented to replace eggs? Well, even though most modern recipes call for both, you can still use it that way. Simply stir together two tablespoons of water, one tablespoon of vegetable oil (to replace the egg’s fat content), and two teaspoons of baking soda. Voila! You are back in baking business!

Use Aquafaba for Your Eggless Cake Recipe

Aqua-what now? Aquafaba is a relatively new player on the field of egg substitutes. It is the liquid that canned beans are packed in. You can also make your own by simply cooking dried beans. Just save the liquid that remains when you’ve removed the beans.

Aquafaba is somewhat mysterious in its action, but it works beautifully to keep cakes and pastries light and fluffy. You can even whip it like egg whites to make a convincing meringue, or turn it into butter and use it for an extra-flaky pie crust.

Some bakers believe that aquafaba does an even better job than eggs of creating a very moist cake. They will use it even when there’s no reason to omit eggs from their recipe.

You can also use aquafaba to make a creamy, smooth buttercream-style icing to top your vegan cake!

Now that you know some of the secrets used by pastry chefs who can’t bake with eggs, you are probably excited to don your apron and tackle your very own eggless cake recipe.

Not so confident in the kitchen? Or simply don’t have the time to do your own baking? No problem — just give us a call and we can provide the eggless desserts of your dreams!