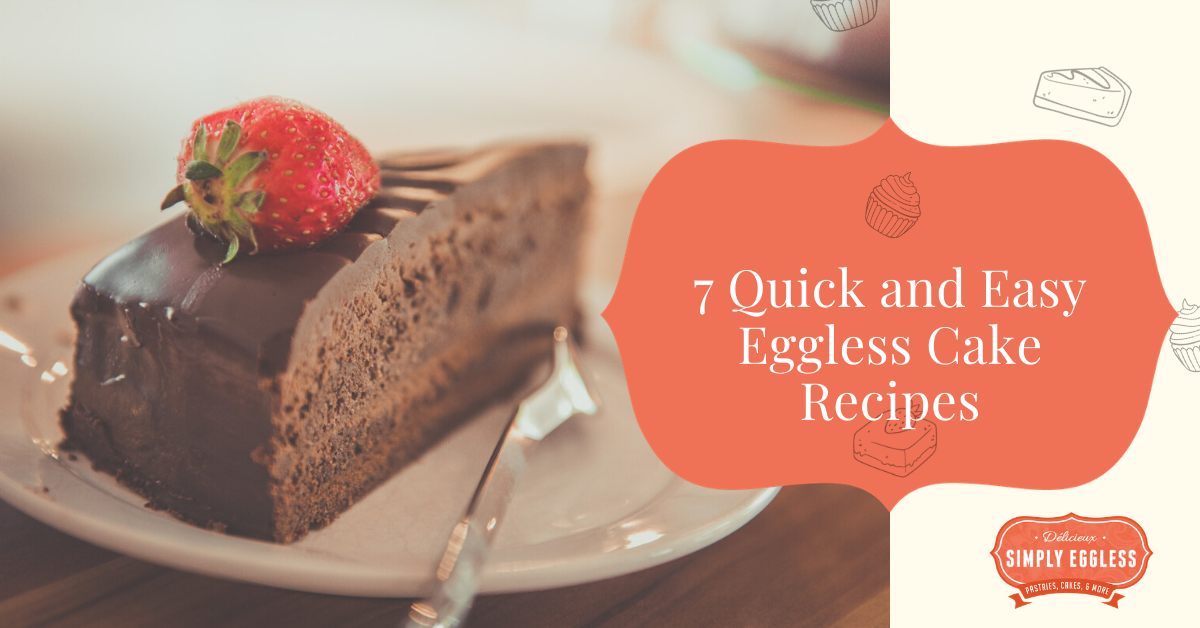 Do these sound like boring health food to you?

Veganism doesn’t have to be a sacrifice. As actor Joaquin Phoenix reminds us “It takes nothing away from a human to be kind to an animal.”

This is especially true today as veganism continues to become increasingly popular. Veganism’s popularity quadrupled between 2012 and 2017. With such a massive surge in popularity and interest, there’s been a major influx of both new vegan products, knowledge, and information.

Today, we’re going to be taking a look at eggless cake recipes. It goes without saying, but eggless cake isn’t just for vegans, either. Food allergies or other dietary restrictions might prevent someone from being able to enjoy delicious baked goods that contain eggs or other animal products.

Eggless cake can be enjoyed by pretty much everybody. You don’t even have to tell people it doesn’t have any animal products. They’ll likely be so busy basking in the deliciousness they won’t even notice!

To some, it may seem like sacrilege to bake without eggs. That’s a rather limited view to take on the chemistry of baked goods, however. Eggs are largely binding agents, meaning they help hold the other ingredients together. If you have any experience in the kitchen, however, you’ll know that almost anything can be substituted if you know what you’re doing.

In an eggless cake, eggs can be swapped out with mashed bananas, applesauce, vinegar, or baking soda.

While eggless cakes are just as tantalizing as the dairy-inclusive variety, there are a few things you’ll want to keep in mind. Consider these tips on how to make eggless cakes.

Beat The Fat and Sugar

One of the things that eggs do in a recipe is to help keep it light and fluffy. Without eggs, you’ll need to spend some extra energy getting your oil or butter and sugar mix as whipped as possible. This will help prevent your eggless cake from being too tough or dense.

Be Gentle With The Dry Ingredients

Once you’ve got your fat and sugar mixture blended properly, you’ll want to be careful to keep it that way. Add dry ingredients gradually rather than all at one time.

Be Careful During Cooling

If you’re creating some kind of sponge or bundt cake, you’ll want to remove it from the pan before letting it cool. This will prevent it from becoming too hard and dense.

You’ll most likely want to let your cake cool on a wire rack, as well. This will allow a maximal amount of airflow to help your cake set up properly and prevent it from collapsing.

Now that the formalities are out of the way, let’s get into some eggless cake recipes!

Atta cake is an eggless cake recipe that’s a good substitute for your traditional sponge cake. Eggs are replaced with yogurt, cinnamon, nuts, and wholewheat flour, making for a light, airy snack for after dinner or tea time.

Having a hard time settling on either a chocolate or vanilla cake? Why not both! Eggless marble cake replaces eggs with milk and vinegar to add the fluff to its delicious vanilla and chocolate swirls.

Looking for a more traditional-style cake, maybe for a birthday party or special occasion? Check out this eggless vanilla cake recipe from MommysHomeCooking. She replaces eggs with milk and apple cider vinegar.

Whole milk can be substituted with any kind of plant milk, as well, so it can be made completely vegan.

The eggless buttercream recipe is what makes this eggless vanilla cake so noteworthy, however. Not only is it delicious, lighter and fluffier than anything Betty Crocker could dream up, but it’s also pretty as a picture, so you can have adorable frosted cakes and cupcakes everyone will love!

Living without eggs doesn’t mean you have to live without cuteness and whimsy!

Sometimes, only a chocolate cake will do. This eggless chocolate cake recipe from AllRecipes.com is for all you chocolate fiends out there looking for a slightly more healthy take on a moist, classic chocolate cake that is still utterly delicious!

This eggless chocolate cake recipe is particularly noteworthy for the way it uses cocoa instead of artificial chocolate. This lets you really savor the flavor of real, high-quality chocolate.

Love the cherry-like, amaretto flavor of almonds? You’ll love this almond and cashew cake recipe. It’s easy to make and makes for a delectable tea-time treat or after-dinner snack.

This almond and cashew cake is particularly striking with the inclusion of cardamom. This gives this pastry an exotic flavor, like something you’d get at an Indian restaurant. If you’re looking for something a bit unique, whether to spice up your own diet or to make an impression at a dinner party, give this recipe a spin.

This eggless pineapple pastry recipe strikes the balance between a traditional pineapple upside-down cake and something more exotic like flan or tiramisu. It’s a layered sponge cake that is layered with cream and chunked pineapple. Replacing eggs with yogurt offers a slightly tangier taste while still staying as light and fluffy as you would hope for!

We conclude our list with the most elaborate offering, for those looking for the most decadent eggless cake recipe. It’s proof positive that living without eggs does not mean living without flavor.

Le Turinois, or chocolate cashew cake, is made resplendent with toasted fennel seeds, bitter chocolate, chestnuts, vanilla, and rum. Even better, this eggless cake is as easy to make as it is delicious. It’s actually a no-bake cake that can be prepared in an hour then left to set overnight.

Veganism is only going to continue to become more popular as we strive to learn how to live in balance with our planet. That means the odds that you’ll have to cook for someone who’s egg-free increase with each passing year. It’s a great idea to have some trusted go-to recipes in your recipe box.

You’ve come to the right place! There’s never been such a range of decadent egg-free pastries in every conceivable shape, size, and texture.

Whether you’re looking for an eggless cake or something more decadent, like eggless cheesecake, we take great pride in offering our customers the most tantalizing desserts that are also healthy and cruelty-free!

Browse our menu today and give your taste buds a teaser of what eggless baking can offer.